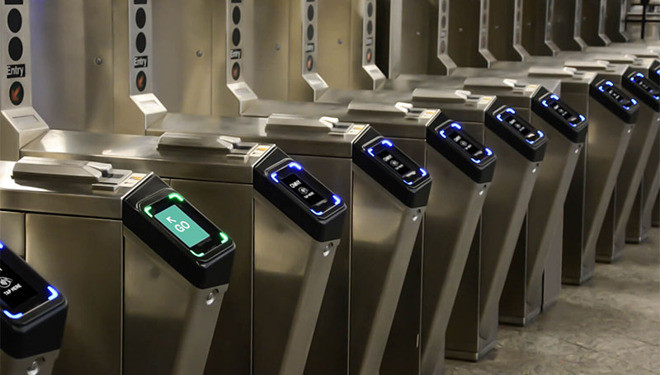 The Metropolitan Transportation Authority (MTA) announced today that its cutting-edge OMNY contactless fare payment system is now available at the 34 St-Penn Station intermodal complex, one of the busiest transit hubs in North America, as the MTA continues its rollout to a total of 85 subway stations by the end of the month. The news comes on the heels of another major milestone: the recent surpassing of 4,000,000 taps, far exceeding even the most optimistic usage projections.

“Today is yet another momentous occasion in the continued rollout of OMNY, the MTA’s game-changing contactless fare payment system,” said NYC Transit President Andy Byford. “Penn Station is one of the system’s busiest subway stations and will allow hundreds of thousands of commuters the opportunity to tap and ride using a device or contactless card of their own choosing, including customers arriving on the Long Island Rail Road, New Jersey Transit, and Amtrak, who connect with the subway system here at Penn Station. Chase, Visa and other partners have done an immense amount of work to help spread the word about OMNY and we’re thankful for their support.”

The 34 St-Penn Station complex is one of the busiest transit hubs in New York City, with more than 160,000 people per day swiping in using MetroCards today. Today, 96 OMNY readers, also known as validators, went live at 18 turnstile arrays serving the

subway lines. The subway customers at the complex include many LIRR, NJ Transit and Amtrak commuters and travelers arriving at Penn Station.

The OMNY system’s better-than-expected adoption rate is expected to grow exponentially now that the system is rapidly becoming available across the transit system after the initial public pilot. By the end of this month, all MTA-operated buses on Staten Island, two Staten Island Railway stations and 85 subway stations will have active OMNY readers that allow customers to pay their fare by simply tapping a contactless, bank-issued payment card or a smart device. The MTA remains on track to deploy OMNY readers at every subway station and on all MTA-operated buses by the end of 2020.

Chase and Visa are among several major providers of contactless payment cards, and attended today’s announcement at 34 St-Penn Station as part of the companies’ broader efforts to raise awareness of contactless payments and OMNY across New York. The MTA is expected to host similar events with other payment industry partners over the course of the OMNY rollout. MetroCard will coexist alongside OMNY until 2023.

“I’m proud that millions of Chase customers across the New York City metro area have embraced the speed, security, and simplicity of contactless technology,” said Abeer Bhatia, President of Chase Card Marketing, Pricing and Innovation. “To take advantage of the new OMNY system, our customers can simply tap to ride. Or if they do not currently have a Chase Visa contactless credit or debit card, go to www.chasetaptopay.com to request a new card. New Yorkers might soon forget what it was like to refill their MetroCard!”

“Visa has seen New Yorkers quickly embrace tapping to pay as they benefit from a fast, easy and secure way to get around New York City,” said Dan Sanford, global head of contactless payments, Visa. “With more Chase Visa contactless cards being used every day, we are excited to continue our efforts alongside Chase and the MTA to deliver more ways for customers to save valuable time and improve their daily routines throughout the OMNY expansion.”

The MetroCard will be available for use throughout the entire OMNY rollout, in order to ensure a smooth transition. Purchasing fare media with cash — whether the MetroCard or its contactless OMNY replacement — will always be an option. The introduction of the OMNY system’s own contactless card in 2021 will provide expanded options for cash-paying customers, and will come in two varieties – a virtual card available in the OMNY app and a physical contactless card available at thousands of retail locations throughout the New York region. The complete OMNY system will accommodate all customers and will be capable of offering all the fare options and services available today with MetroCard and eTix.

Completion of the entire OMNY project in 2023 will empower customers to choose how, when and where they pay for their fares. OMNY will provide more robust customer service, including self-service options as an online account and mobile app. The forthcoming OMNY app will offer a centralized fast, convenient and secure experience, allowing customers to plan their trips, manage their accounts, and make fare payments across MTA services, including subway, bus, and commuter rail.

“Al Putre and his entire team continue to do a brilliant job of bringing this exciting fare payments technology to New Yorkers across the five boroughs,” said President Andy Byford. “We’re pleased that our commercial partners are providing substantial communications support and assisting us with informing the public about this brand new way of paying your fare.”

OMNY was built based on global payment standards, and to date has accepted successful taps from bank cards issued in 116 countries and from every continent other than Antarctica. The public pilot phase of the rollout brought OMNY contactless payments to all Staten Island MTA buses and at all subway station entrances on the

lines between Grand Central–42 St and Atlantic Av–Barclays Ctr. Initially, OMNY offers a full-fare, pay-per-ride option. New fare products will be introduced after all subway stations and bus routes are equipped with the new technology. Customers can view their trips and charges by registering for an OMNY account at https://omny.info/. The OMNY website will be updated regularly to give our customers a one month look-ahead at which lines and station will be OMNY-equipped, along with a current list of all current OMNY-enabled locations.

“I’ve always known we had a great team working on this project, but even I’m not sure I knew just how successful the pilot would be,” said Alan Putre, OMNY Program Executive. “The success of the OMNY contactless payment pilot has brought new viability to our bus and subway network and I’m thrilled that we’re now expanding OMNY to our customers across the system.”

Purchasing fare media with cash will always be an option.