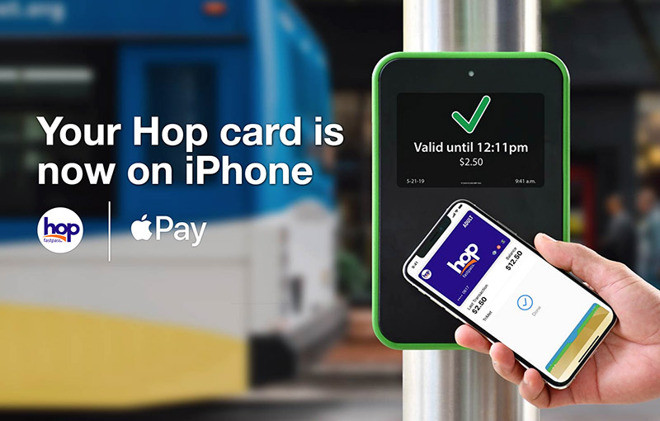 Starting this week, riders in the Portland-Vancouver region can add a Hop Fastpass® card to their Apple Wallet and use their iPhone and Apple Watch to ride TriMet, C-TRAN and Portland Streetcar.

Hop is the first transit fare card in North America to launch in Apple Wallet. Riders will now be able to enjoy the true tap-and-go convenience of Express Transit with Apple Pay on iPhone and Apple Watch, and continue to enjoy all the benefits of Hop, including the ability to earn day and month passes and purchase Adult, Honored Citizen and Youth fares.

TriMet, C-TRAN and Portland Streetcar are also the first in the world to launch Apple Pay Express Transit on iPhone or Apple Watch with both a transit fare card and credit and debit cards, offering local riders and visitors multiple ways to easily pay for trips.

With Apple Pay Express Transit, riders can truly tap-and-go by holding their iPhone or Apple Watch near the reader — there is no need to wake or unlock the device, open an app or use Face ID or Touch ID.

“Apple Pay transforms everyday experiences and we’re thrilled Portland-Vancouver residents will now be able to go quickly through their daily commute with just their iPhone and Apple Watch.”

While Apple Pay Express Transit features are available in other cities around the world, including China and Japan, Portland's rollout is the first to launch with both transit fare card and credit and debit card payment options.

Apple Pay is expected to launch with similar features on transit systems in Chicago and New York City later this year.